this page is dedicated to pokémon,
a series that is very important to me!

"pokémon (an abbreviation for pocket monsters in japan) is a japanese media franchise managed by the pokémon company, a company founded by nintendo, game freak, and creatures. the franchise was created by satoshi tajiri in 1996, and is centered on fictional creatures called "pokémon". in pokémon, humans, known as pokémon trainers, catch and train pokémon to battle other pokémon for sport. all media works within the franchise are set in the pokémon universe."
— the pokémon wikipedia entry

my thoughts on pokemon!

where do i even start with pokémon? this series has been with me since i was around six years old! it's super special to me. in fact, pokémon: red version was one of my very first video games ever... definitely my very first nintendo game. i've been a huge fan of the franchise ever since the fateful day that my parents bought that game cartridge for me.

a lot of time has passed since then, but my love of pokémon is still as strong as ever. i've played all of the mainline games and i don't intend to ever stop playing them! i've had tons of great times working on my national pokédex for each generation. i suppose that i really took the whole 'gotta catch 'em all' motto to heart! but i also love how there's so much that you can do in each of the games... whether you're interested in battling, or taking part in pokémon contests, or collecting pokémon - there's lots of great times to be had in each and every one!

my favorite pokémon generation is probably generation two. i'll admit, this is mostly because of nostalgia - i have so many amazing memories attached to pokémon: crystal. totodile is my favorite pokémon of all time, and the johto games also have my favorite character in the pokemon series... namely... (drumroll)... silver! in my opinion, he is the best rival that pokémon has ever had... his character development over time is just amazing! i'm really happy that johto got treated well with the heart gold and soul silver remakes, too. they ended up being the perfect pokémon games. quite frankly, it's what johto deserves!

i also really love the games based in the alola region. in particular, i enjoyed pokémon: sun version (solgaleo's design is just perfect... i absolutely love lions, haha!). as someone who lives in the caribbean, the setting being based around island life is super comforting to me. and litten is just so cute!! the seasons of the pokémon anime that were based in alola were also some of the best pokémon episodes ever - i highly recommend them. overall, though, i've loved each and every pokémon game! 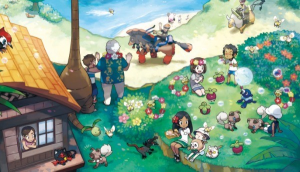 in addition to keeping up with each new generation of pokémon, i also love reading about pokémon lore, analyzing pokémon designs, buying pokémon merchandise (i collect totodile merch!!), and talking about pokémon with people. i really enjoy the themes that pokémon explores - those of friendship, being in harmony with nature, and, of course, the triumph of good over evil!! plus, the pokémon themselves are just so cute and cool...! \o/